Browsing my local paper, The Register Herald, I found this headline which arrested my attention. 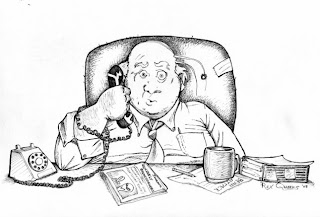 Note: For the millions of you unacquainted with the aforementioned personage, Heck Davis is a character from my short story serial The Fledge Chronicles (published in West Virginia South). He is drawn here by Rex Queems. Here is a brief selection from a very early story from the serial called “A Very Bad Sign.”

“Across town in his storefront office Heck Davis was preparing the latest edition of The Journal of Unlikely Coincidences. Heck was the not-so-secret, secret publisher of the tabloid which speculated on international conspiracies and local peculiarities. In Heck’s publication these were often tied together in ill-fitting knots. Thus the moon-landing ‘cover-up’ and the town Assessor’s election had both been sources for a singular claim involving the true reason behind the building of a bat sanctuary at the Fledge Overlook Park. That headline had read ‘Moon-Bat Connection Certain in Assessor’s Race.’ Rarely did the words appear in the headlines so explicitly, but assessing Heck’s tabloid as certain moonbattery was the immediate response of wise readers throughout the tiny town of Fledge, West Virginia.”