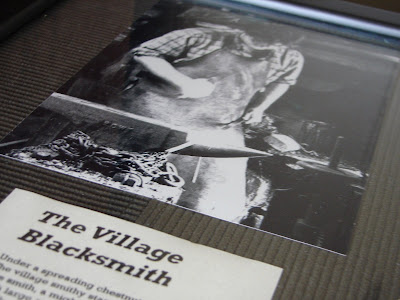 Under a spreading chestnut-tree
The village smithy stands;
The smith, a mighty man is he,
With large and sinewy hands;
And the muscles of his brawny arms
Are strong as iron bands.

His hair is crisp, and black, and long,
His face is like the tan;
His brow is wet with honest sweat,
He earns whate’er he can,
And looks the whole world in the face,
For he owes not any man.

Week in, week out, from morn till night,
You can hear his bellows blow;
You can hear him swing his heavy sledge,
With measured beat and slow,
Like a sexton ringing the village bell,
When the evening sun is low.

And children coming home from school
Look in at the open door;
They love to see the flaming forge,
And bear the bellows roar,
And catch the burning sparks that fly
Like chaff from a threshing-floor.

He goes on Sunday to the church,
And sits among his boys;
He hears the parson pray and preach,
He hears his daughter’s voice,
Singing in the village choir,
And it makes his heart rejoice.

It sounds to him like her mother’s voice,
Singing in Paradise!
He needs must think of her once more,
How in the grave she lies;
And with his haul, rough hand he wipes
A tear out of his eyes.

Toiling,–rejoicing,–sorrowing,
Onward through life he goes;
Each morning sees some task begin,
Each evening sees it close
Something attempted, something done,
Has earned a night’s repose.

Thanks, thanks to thee, my worthy friend,
For the lesson thou hast taught!
Thus at the flaming forge of life
Our fortunes must be wrought;
Thus on its sounding anvil shaped
Each burning deed and thought.

There are poems that are truly beautiful and there are poems that are beautiful and true. This one is better described as the latter. I wish I were more like that Blacksmith. My oldest brother framed this poem (and matted it nicely) for me and gave it to me as a gift for Christmas (which my family usually celebrates on the Saturday nearest Epiphany). What an excellent gift, more of a gift to be received than a commodity to be purchased and passed into other hands (not that there’s anything wrong with that). My brother, in describing why he loves the poem, hit the nail on the head when he said it was just so true to life, like Ecclesiastes, it tells the truth about life. The gift also alludes, at least this is my inference, to the heritage we have from our Papaw, a man who appreciates and writes beautiful poetry. He loves Longfellow, and so do we. So it is a handsome gift, and one I am very thankful for. I hope you enjoy the poem.

S. D. Smith is the author of The Green Ember Series, a bestselling middle-grade adventure saga. When he’s not writing adventurous tales of #RabbitsWithSwords in his writing shed, dubbed The Forge, Smith loves to speak to audiences about storytelling, imagination, and seeing yourself as a character in the Story. S. D. Smith lives in West Virginia with his wife and four kids.

Subscribe to S. D. Smith’s Updates and get The Green Ember Audiobook for FREE: